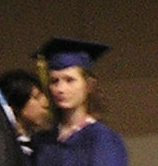 Micro/Macro has fulfilled one of its purposes: helping me graduate!

This slightly blurry photo was surprisingly one of the clearest from where my husband sat in the audience. In this one, I was waiting for the program director, Scott Barrows, to introduce the class of 2009. In fact, only two of us walked. The other girl's last name started with R, and mine starts with L, so I was before her. The College of Applied Health Sciences was the first to be called, and within that, Biomedical Visualization. So I was the first person to be called!

I am never first. My last name, Luther, is right in the middle of the alphabet. Before that, it was Lierl, which is pretty much the same, alphabet-wise. So I was a little uneasy. But I only malfunctioned a little. I walked a little too far, and they had to sort of re-position me in order to put my hood on. I guess it could have been worse.

Anyway, my life as a student may be over, but Micro/Macro will continue to grow and live. Some new possibilities have been suggested, which might allow me to profit from all of my hard work. I will be sure to investigate these, and keep you posted!
Posted by Kristin Luther at 10:47 AM 40 comments:

Eventually, by ignoring the misleading example code and forgetting all about the confusing way they explained it, I got my SWF to dynamically resize within the browser window, embedded in html. Ironically, this is what it was doing before I went to the trouble to embed it in the html page in the first place, but if I had not, there would have been no way to be sure that the visitor has the appropriate Flash Player version (see previous post).

Anyway, in case you were wondering, or ever need to know for one of your own projects, here is what I did:

Inside the code generator, choose 100% width and height. Put this in the style tags inside the head.


And you're done!
Posted by Kristin Luther at 5:38 AM No comments:

Other Blogs About Art or Science